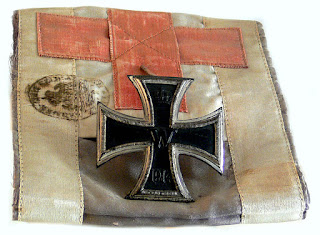 November 3 is the feast of St. Martin de Porres but it is also the day when many Catholics remember the Jesuit priest, Blessed Rupert Mayer.  He was born in Germany in 1876 and entered the Society of Jesus in 1900, one year after his ordination.  He served as a chaplain in the German army during World War I and was the first chaplain to be awarded the Iron Cross for bravery.  His service in the military ended when his left leg was shattered in a grenade attack and had to be amputated.

After the war Fr. Mayer went to Munich where he served the poor and started two Sunday Masses for travelers at the main railroad terminal.  When Hitler rose to power Fr. Mayer spoke out against Nazism and in 1937 was ordered by the Gestapo to stop speaking in public.  He continued preaching in church and was arrested three times.  In 1939 he was sent to the Sachsenhausen concentation camp near Berlin. 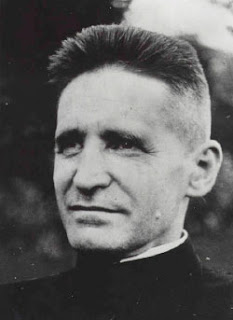 As the health of the popular sixty-three year old Jesuit war hero began to deteriorate the camp officials, afraid that he would die and be declared a martyr, sent him to a Benedictine monastery.  When World War II ended he returned to Munich and his pastoral work.

On November 1, 1945, while celebrating Mass and in the middle of his homily about how Christians are called to imitate the saints, Fr. Mayer collapsed and died.  Pope St. John Paul II beatified him in 1983.

Blessed Rupert Mayer is an example of one who lived a daily offering of himself out of love for God and his brothers and sisters.  His favorite prayer has been made into a song by the Catholic Filipino group Bukas Palad.  The lyrics are:

Lord, what You will let it be so
Where You will there we will go
What is Your will help us to know


Lord, when You will the time is right
In You there's joy in strife
For Your will I'll give my life