Tears from the Heart of Jesus 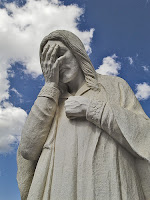 Jesuit Retreat House on the Mississippi River just south of St. Louis.  Here is my closing homily, based on the readings of the day—Revelation 5: 1-10 and Luke 19: 41-44.

Both of our readings contain tears.  John’s vision, in which no one can be found to open the scroll which will reveal God’s plan, leads him to weep.  In the Gospel, Jesus, as he approaches the city of Jerusalem, weeps over it.  He predicts the city’s destruction and cries.  Its future could have been one of peace, but in rejecting Jesus, the people rejected the one who came to show the way to that justice which alone is the basis for peace.

On July 8, 2013, Pope Francis visited an island in the middle of the Mediterranean Sea—Lampedusa.  He went there after many men, women, and children had drowned as they tried to get from Libya, North Africa, to Italy.  He asked:

“Has any one of us grieved for the death of these brothers and sisters? Has any one of us wept for these persons who were on the boat? For the young mothers carrying their babies? For these men who were looking for a means of supporting their families? We are a society which has forgotten how to weep, how to experience compassion – ‘suffering with’ others: the globalization of indifference has taken from us the ability to weep!”

If we have hearts like the Heart of Jesus, we will be moved to weep for such suffering and death.  Our prayers will be accompanied by tears.

We weep but we do not despair.  As John’s vision continues in the first reading, he sees one who is able to open the scroll—the “lion of the tribe of Judah, the root of David”—Jesus.  He is the Lamb of God who was slain.  He perfectly fulfilled God’s plan for creation and in doing so became the victor over sin and death.  The vision ends with worship and hope.  Jesus has triumphed.  He has purchased for God those from every tribe and tongue, people and nation.”  He has “made them a kingdom and priests for our God, and they will reign on earth.”

We, the baptized, are now a “royal priesthood” (1 Peter 2: 9).  We are royalty not as the world thinks of it but as Jesus does. At the Last Supper he said that the kings of this world “lord it over” their subjects but it must not be so among his followers. “Rather, let the greatest among you be as the youngest, and the leader as the servant” (Luke 22: 25-26).

We share in Christ’s priesthood by offering prayers and sacrifices.  The Sacred Chrism used to consecrate the walls and altars of new churches and the hands of newly ordained priests and everyone at their baptisms and confirmations—this sacred oil consecrates each of us for the sacred purpose of offering worship to God.  We do that at the Eucharist and in our daily lives.

Moved, as the Heart of Jesus is, at the suffering in our world, we offer ourselves as He did for its ultimate salvation and peace.