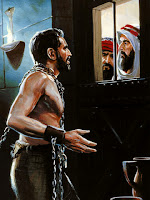 Why did John send his disciples to question Jesus?  He baptized Jesus.  He should know who he is.  Perhaps he had doubts or his disciples had doubts about the identity of Jesus.  He wasn’t acting like the promised Messiah was supposed to act.  He didn’t come with military power and glory to liberate Israel from its oppressors.

Jesus teaches that he is not that kind of Messiah.  Rather, he is the fulfillment of Isaiah’s prophecy (First Reading, Isaiah 35: 1-6a, 10).  His actions reveal that the Messiah came not to punish and destroy but to forgive and save.  He is a merciful Messiah who brings “divine recompense.”  To “make recompense” is to pay for something.  Jesus is the Divine Messiah who pays for the sins of the world.  On the cross he reconciled humanity to God and to one another by taking upon himself the sins of the world.

Jesus praises John, calling him the greatest human being of his time.  But then he says “the least in the kingdom of heaven is greater than he.”  That’s you and I.  Jesus says we are greater than John the Baptist.  How?  Why?

John never saw the greatest act of love the world has ever known—the cross.  He was not baptized into the death and resurrection of Jesus.  At the time of the Gospel, he was not joined to the Body of Christ.  Nor did he receive the Body and Blood of Christ in the Eucharist.  We, however, know about the cross, have been baptized and joined to Christ’s Body, and have received him, Body and Blood, soul and divinity, in the Eucharist.

As the actions of Jesus provided evidence of his identity, so must ours.   We must show that we are joined to Christ and are members of his Body.  This is where our Second Reading (James 5: 7-10) comes in.  James tells his readers to be patient and to not complain “about one another.”  True Christians are like Christ—patient and merciful with sinners.

Patience is a virtue.  I like to call virtues “spiritual muscles.”  Just as our physical muscles only grow and develop through nourishment and exercise, so too our spiritual muscles.  Patience does not appear out of the blue.  It grows through exercise.  Every time we find ourselves feeling impatient, we are being given an opportunity to exercise patience.  This thought can be especially helpful during the holiday season which is often filled with stress of one kind or another.  Exercise patience and mercy and they will grow, helping you to be more true to your deepest identity—a Christian in deed and not just in name.