The First Reading (Isaiah 7: 10-14) and the Gospel (Matthew 1: 18-24) for the Fourth Sunday of Advent, Cycle A, contrast two figures—King Ahaz and Joseph, the husband of Mary.

Ahaz was King of Judah from 735-715 BC. He resisted God’s direction as it was proposed to him by the prophet Isaiah and chose, instead, to rely on human ingenuity and power.  He did not want a sign from God and so he hypocritically declared “I will not tempt the Lord!”  But God gave him the sign anyway.  It was that God will send “Emmanuel” and will save his people.  Human resources are powerless.  God alone saves.  Therefore, trust God!

Joseph is an example of this.  He trusts God’s guidance and is open to God’s direction even in the most confusing situations.  Joseph is described as “a righteous man.”  He is “Law-abiding” and committed to doing God’s will.

God gave the Chosen People a Law to help them on their journey through life.  But the Law did not cover every conceivable situation and so the religious leaders and scribes “fine-tuned” the Law with many additional laws to cover every eventuality, to spell things out in black and white in order to avoid any confusion and to help people faithfully follow God’s Law.

But life is not black and white.  There is a lot of gray.

In Joseph’s case, the laws were clear.  Deuteronomy 22: 20-21 states: “if evidence of the girl’s virginity is not found, they shall bring the girl to the entrance of her father’s house and there her townsmen shall stone her to death because she committed a crime against Israel by her unchasteness in her father’s house. Thus shall you purge the evil from your midst.”  Mary, Joseph’s betrothed,  was to be stoned.

But Joseph cannot do this.  His love for her is greater than this law.  In a quandary, he chooses a middle path: he will not allow the full force of the law to be carried out, but will quietly renounce his relationship with her.

Speaking about this in his Angelus Address of December 22, 2013, Pope Francis said:

“The Gospel does not explain what his thoughts were, but it does tell us the essential: he seeks to do the will of God and is ready for the most radical renunciation. Rather than defending himself and asserting his rights, Joseph chooses what for him is an enormous sacrifice. And the Gospel tells us: ‘Joseph, being a just man and unwilling to put her to shame, resolved to send her away quietly’ (1:19).

“This brief sentence reveals a true inner drama if we think about the love that Joseph had for Mary! But even in these circumstances, Joseph intends to do the will of God and decides, surely with great sorrow, to send Mary away quietly. We need to meditate on these words in order to understand the great trial that Joseph had to endure in the days preceding Jesus’ birth.”

Then Pope Francis went on to compare Joseph and Abraham:

“It was a trial similar to the sacrifice of Abraham, when God asked him for his son Isaac (Genesis 22): to give up what was most precious, the person most beloved. 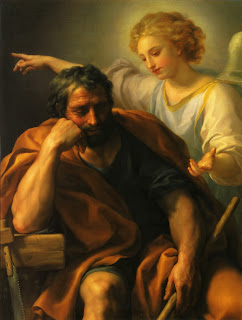 “But as in the case of Abraham, the Lord intervenes: he found the faith he was looking for and he opens up a different path, a path of love and of happiness. ‘Joseph,’ he says, ‘do not fear to take Mary your wife, for that which is conceived in her is of the Holy Spirit’ (Matthew 1:20).”

Faith in God who is Love, faith in the Law of Love, wins the day.  Joseph, open to the Word of God that came to him through an angel, follows God’s will.

Some say that Joseph knew the origin of Mary’s child and chose to break off the engagement because he felt himself unworthy to be the foster father of the Son of God.

Either way, true humility means obedience to God’s will even in the midst of confusion and the disruption of one’s own plans.  Pope Francis continued:

“This Gospel passage reveals to us the greatness of St Joseph’s heart and soul. He was following a good plan for his life, but God was reserving another plan for him, a greater mission. Joseph was a man who always listened to the voice of God, he was deeply sensitive to his secret will, he was a man attentive to the messages that came to him from the depths of his heart and from on high. He did not persist in following his own plan for his life, he did not allow bitterness to poison his soul; rather, he was ready to make himself available to the news that, in a such a bewildering way, was being presented to him. And thus, he was a good man.”

Joseph was the perfect man to be the husband of Mary and the foster father of Jesus.  He had the freedom to surrender to God’s will perfectly and to follow the Holy Spirit’s direction in the midst of life’s complexities.

“Life father, like son.”  Jesus showed similar freedom in following the Law of Love even when it conflicted with the many laws that were designed to offer black and white answers to life’s complex and morally confusing situations.  He was accused of breaking God’s Law by ignoring purification rituals and working miracles of healing on the Sabbath.

Life is not easy.  It’s filled with competing “goods” that create confusion.  But if we focus on God’s Word, discern the movements of the Holy Spirit, and ultimately trust in God rather than in ourselves and our ability to figure everything out, then, in the words of St. Julian of Norwich, “all shall be well, and all manner of thing shall be well.”