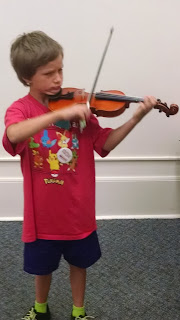 On the second Tuesday of every month, a group of volunteers come to the national offices of the Pope's Worldwide Prayer Network to stuff envelopes with our monthly leaflets.  Today a larger group than gathered.  It was a chance to say farewell.

On July 17 Fr. William Blazek, S.J. will become the new director of the Pope's Worldwide Prayer Network in the U.S. and on July 29 I'll be moving to begin a new assignment.  The last fourteen years have been filled with many blessings, one of which is the group of volunteers who came once a month to pray together, to get the monthly leaflets ready to send out around the country and even across the English-speaking world, and to have fun together.

Everyone brought treats which we enjoyed after we celebrated Mass and before the work began.  One person brought a beautiful farewell cake and seven year old Quinn entertained us with his violin.

My blogging has been so sporadic lately because I find myself living in three worlds: current commitments, getting things ready for the new director, and getting ready to move and take over my new mission.  What is it?

Starting July 31 I will be the next director of St. Francis Mission on the Rosebud Reservation in western South Dakota.  Though I've never lived and worked there, this is a ministry with which I am familiar.  From 1977-80 I taught at Red Cloud Indian School on the Pine Ridge Reservation, just west of the Rosebud.  From 1989-95 I worked at the Sioux Spiritual Center, a retreat house for Native people that served the five reservations that are part of the Rapid City Diocese.  With Fr. John Hatcher, S.J., whose place I will be taking at St. Francis, we coordinated the deacon and lay ministry formation program of the diocese.  And from 1995-9 I was the Wisconsin Province Assistant to the Provincial for Native Ministry.

In 1886, shortly after the Lakota people were forced to live on reservations, Jesuits founded St. Francis Mission and began serving their pastoral, social, and educational needs.  Here is the website for St. Francis--an old mission that has become a new mission with its innovative programs.

I hope to continue blogging and working with Catholic radio stations around the country.  I'll also always continue to offer up each day, returning love for the great love Jesus has shown us and praying with and for the intentions of the Holy Father and of all Apostles of Prayer. 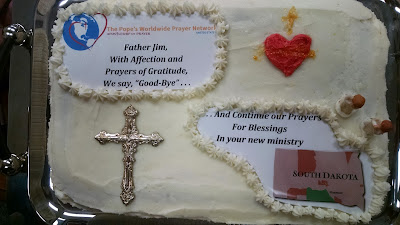