Doing Greater Works as We Climb

In the Gospel for the Fifth Sunday of Easter, Cycle A (John 14: 1-12), we see Jesus at the Last Supper getting impatient with his apostles.  He has been with them for several years.  He is giving them his final discourse and they clearly do not know him.  In response to Philip who asks Jesus to show them the Father, Jesus says: “Have I been with you for so long a time and you still do not know me, Philip? Whoever has seen me has seen the Father.  How can you say, ‘Show us the Father’? Do you not believe that I am in the Father and the Father is in me?”

Right before this Jesus had declared: “I am the way and the truth and the life. No one comes to the Father except through me. If you know me, then you will also know my Father. From now on you do know him and have seen him.”

Jesus, fully divine, is the truth about who God is.  God is love, a love that is willing to give all for the good of humanity.  Jesus, fully human, is also the truth about what humanity is meant to be.  Jesus is the way to live.  Following Jesus and the trail to heaven that he has blazed, we will come to the eternal life for which we were made. 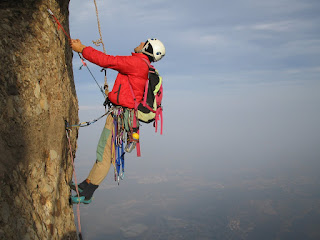 In his Ascension Day homily in 2013, Pope Francis compared Jesus to a mountain-climbing guide: “In Christ, true God and true man, our humanity was taken to God. Christ opened the path to us. He is like a roped guide climbing a mountain who, on reaching the summit, pulls us up to him and leads us to God. If we entrust our life to him, if we let ourselves be guided by him, we are certain to be in safe hands, in the hands of our Savior, of our Advocate.”

This latter presence is what some of the early Christians missed.  The first reading (Acts 6: 1-7) shows that the early Church wasn’t always the idyllic picture of harmony that is painted in earlier chapters of Acts (see 2: 42-47 and 4: 32-35).  There was racism and division.  The Greek-speaking Christians were being neglected by the Jewish Christians.  In response, a new ministry developed to care for the poor.

But without a change of heart that leads one to see in every person a brother or sister in Christ, new ministries are not enough.  A deeper vision of unity is required.

The second reading (1 Peter 2: 4-9) provides that.  The Church is a “spiritual house” that has Jesus as its cornerstone.  Members of the Body of Christ are “living stones.”  We are “a holy priesthood,” “a royal priesthood.”  Through baptism we share in the priesthood of Jesus who replaced the old animal and grain sacrifices before him with his one perfect offering of himself on the cross.  This offering is made present every time we celebrate Mass.  There we offer the “spiritual sacrifices acceptable to God.”  We offer ourselves with Christ for the salvation of the world.  Then we go forth from Mass to live the “spiritual sacrifices” in our daily lives.

This is the spirituality of offering that is at the heart of the Apostleship of Prayer.  We begin each day offering ourselves—all our prayers, works, joys, and sufferings; all our thoughts, words, and deeds; every breath and every heartbeat.  This offering of our day to God with Jesus is very important and can work wonders.

Jesus promised this when he said in the Gospel: “Amen, amen, I say to you, whoever believes in me will do the works that I do, and will do greater ones that these, because I am going to the Father.”

Really?  Do I believe that we can do greater works than the ones Jesus did during his earthly life?

Three events of the last one hundred years should convince us that our faith-filled prayers can work wonders.  All three are connected with the Blessed Virgin Mary’s appearances at Fatima, Portugal in 1917.

First, there is the story of Jesuit Father Hubert Schiffer about whom I wrote August6, 2016.  He and several other Jesuits, living near the epicenter of the first atomic bomb, survived and lived for several more decades.  A Defense Department expert could not find any physical reason for their survival.  He concluded that a power greater than that of an atomic bomb protected them from harm.  According to Father Schiffer, “we believe that we survived because we were living the Message of Fatima. We lived and prayed the Rosary daily in that home.”

In 1989 the Berlin Wall came down and I’m convinced that prayer was behind its destruction.  See my blog post of October 3, 2016 for a photo of a section of the wall that can be seen at Fatima.

Lastly, on October 13, 1991, a movie about Fatima was shown on Soviet television.  The movie was repeated on November 7, the anniversary of the Russian Revolution.  On Christmas Day, the flag of the U.S.S.R. at the Kremlin was lowered for the last time.  The Soviet Union broke apart and Communism ended its stranglehold on that part of the world.  Since then, 29,000 churches have been built or reopened, the number of monasteries has grown from 15 to 788, the 500 theological seminaries are full, and the Russian government spends over $100 million a year for the restoration of churches.

I believe these are miracles wrought by prayer.

But wars and conflicts continue.  The threat of nuclear war remains and has perhaps intensified.  The Message of Fatima is as essential as ever—prayer and sacrifice for the conversion of sinners.  When he visited Fatima a year after the assassination attempt in St. Peter’s Square, Pope John Paul II said: “In the light of a mother’s love we understand the whole message of the Lady of Fatima. The greatest obstacle to man’s journey towards God is sin, perseverance in sin, and, finally denial of God.  The deliberate blotting out of God from the world of human thought. The detachment from him of the whole of man’s earthly activity. The rejection of God by man.  Can the Mother, who with all the power of her love nurtured in the Holy Spirit, who desires everyone’s salvation, keep silence about what undermines the very basis of their salvation?  No, she cannot.”

Nor can we keep silence.  We pray and we offer our lives, one day at a time, for peace in the world and the salvation of all.