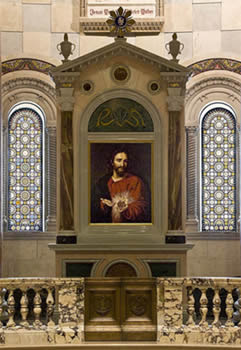 On Saturday I drove to the Shrine of Our Lady of Guadalupe in La Crosse, Wisconsin (see http://www.guadalupeshrine.org/). Sister Christa Marie, whom I met in June when I gave a retreat to her order, the Franciscan Sisters of the Martyr St. George, had arranged for me to concelebrate Mass and to have lunch with Archbishop Raymond Burke. When he was Bishop of La Crosse, Archbiship Burke spearheaded the construction of this beautiful shrine. He is very devoted to the Sacred Heart of Jesus and has promoted the consecration of families, homes, schools, and work places in every parish and diocese where he has served. When he was Archbishop of St. Louis he had a shrine to the Sacred Heart constructed in the cathedral. Currently he serves the Church in Rome where he is the Prefect of the Apostolic Signatura, which has been called the Supreme Court of the Catholic Church. I first met Archbishop Burke in 2003, shortly after I became the U.S. director of the Apostleship of Prayer, when we participated in a Men's Conference in Marshfield, Wisconsin. In various ways--through articles in his diocesan newspapers, by enclosing the annual leaflet with the Pope's monthly intentions in his Christmas cards, by his monetary gifts and personal encouragement--he has been a tremendous supporter of the Apostleship.
I shared with Archbishop Burke the new kid's booklet that we have published to introduce children to the Sacred Heart. He was very affirming of its catechesis and asked for extra copies for his younger relatives. We also talked about the growth of the Apostleship of Prayer in the U.S. and our efforts to reach out to youth and young people through a new Jesuit staff member, Fr. Phil Hurley.

On the three hour drive to La Crosse I'd wondered whether I should be going. Was such a trip worth it? On my drive back Saturday afternoon there was no doubt in my mind that it was Providence that had brought the two of us together once again to support one another in our efforts to spread the word about the love of God revealed in the Heart of Jesus.
Posted by Fr. James Kubicki, S.J. at 10:04 AM