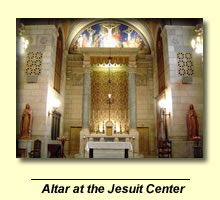 I'm in Wernersville, PA again, at the old Jesuit Novitiate which is now a Spiritual Center for retreats and a community for retired Jesuits. I'm preaching an eight day retreat to over 30 Jesuits, primarily from the Maryland Province but also including a couple Jesuit students from other countries, the mission superiors for Micronesia and for Lebanon, and a couple other Jesuits from the New York and New England Provinces. The retreat is called "A Heart-Centered Approach to the Spiritual Exercises."

I'm not the only director. Fr. Phil Hurley of the Maryland Province joined the Apostleship of Prayer's national office on July 1 as the director of youth and young adult ministry [see http://www.apostleshipofprayer.org/fromfrphil.html]. Though the youngest retreatant here is about 40 and half are over 70, it's important that we work with other Jesuits in reviving the Apostleship of Prayer. In fact, Fr. Hurley will focus a lot of his attention on Jesuit high schools and universities, working with them to introduce their students to the Eucharistic way of life that the Apostleship promotes. Our hope is also to create a "mission band" of young Jesuits who will give youth retreats during the summer and be available as much as possible for retreats, talks, parish missions, and conferences during the school year.

We're very hopeful. At the beginning of the month we sent out our monthly email newsletter and within two days Fr. Hurley received two invitations--one from Houston and another from Monterey, CA.

Giving a retreat to 30 Jesuits is an opportunity for us to share the good news of the Apostleship of Prayer's revival in the U.S. and to invite them to be part of that.
Posted by Fr. James Kubicki, S.J. at 7:36 AM