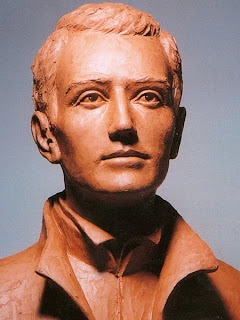 My religious order, the Society of Jesus, has a new "blessed" today. Blessed Bernardo de Hoyos, who lived from 1711 to 1735, was beatified in Spain. This young Spanish Jesuit joins an illustrious group of young Jesuit saints: St. Stanislaus Kostka who was 17 when he died, St. John Berchmans who was 22, and St. Aloysius Gonzaga who was 24. Bl. Bernardo de Hoyos was also only 24 when he died but unlike the others he was a priest. Wait a minute! Doesn't Jesuit formation take 10 to 12 years or more from the time of entrance to ordination? Yes. So did Bl. Bernardo rush through the normal course? No, not really. Why? Because he entered the Jesuits when he was only 14 and he served less than 11 months as a priest before he died of typhus.


What makes this new Jesuit blessed especially important to the Apostleship of Prayer is that he is known as the first apostle of the Sacred Heart in Spain. In a short time, Bl. Bernardo grew in holiness through his devotion to the Sacred Heart of Jesus.


In 1732 he wrote: "I see that everything in my heart is moving towards God, drawn like iron to a magnet. It desires only God, searches only for God, and longs only for God." Within a year of this he felt a deep call to promote devotion to the Heart of Jesus. He wrote: "I felt in my spirit an extraordinary motion--strong, gentle, not abrupt or impetuous. I then placed myself before the Blessed Sacrament, offering myself to His Sacred Heart in order to cooperate as much as possible ... in propagating devotion to it."


These two quotes remind me of something that Pope John Paul II wrote in his letter announcing the Year of the Eucharist, "Mane Nobiscum Domine:" "The presence of Jesus in the tabernacle must be a kind of magnetic pole attracting an ever greater number of souls enamoured of him, ready to wait patiently to hear his voice and, as it were, to sense the beating of his heart."
Posted by Fr. James Kubicki, S.J. at 11:24 PM