Ten years ago today I left Holy Transfiguration Skete in Eagle Harbor Michigan. I had been there for over 7 months while on a sabbatical. I was there discerning whether or not God was calling me to a new vocation as a monk in this Ukrainian Byzantine Catholic monastery on the shores of Lake Superior. I was convinced that God was calling me out of the Jesuits and into the monastic life, but every day for about 7 months I prayed the following prayer: "Lord, I really want to be a monk here. I think You are calling me to be one. But if this is not Your will, if this is not want You want, hit me over the head!" I've always thought that it's a good idea to be direct with God.
I wasn't literally hit over the head, but after those 7 months, when I had about three weeks left in my monastic sabbatical and discernment period, God made it clear that He wanted me to remain in the Society of Jesus. In retrospect I see what a blessing all this was. 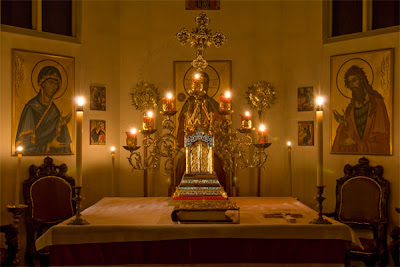 It was a blessing to experience the rich traditions of the Eastern Church. I can say that for those 7 months I learned to breathe a bit with the Eastern lung of the Church, as Pope John Paul II used to say. And, I returned to my life as a Jesuit renewed.
Ten years ago today I left the shore of Lake Superior and arrived here, on the shore of Lake Demontreville, where I worked for the next three years at the Jesuit Retreat House here. I'm In all of this I see God's hand preparing me for my current assignment as the U.S. director of the Apostleship of Prayer. I'm glad that this ministry gives me the opportunity to return to Demontreville to give retreats from time to time. This is a ministry where the words from the Peace Prayer attributed to St. Francis ring true: "It is in giving that we receive."
Posted by Fr. James Kubicki, S.J. at 8:23 PM