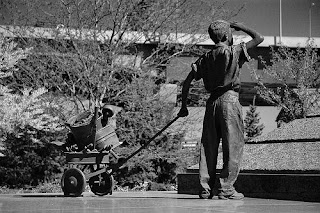 and who through their patriotism supported those who were fighting far from home. And then there's a boy, saluting the returning soldier and pulling a wagon that's filled with all sorts of odd things and junk: paper, wire, cans. In the effort to fight the forces of evil, nothing was wasted. The boy represents all the saving and sacificing that people back home did in order to support the war effort. And then there's a woman dressed in overalls with a wrench in her back pocket. Her name is ... yes, "Rosie, the Riveter." She represents all the women and wives who remained behind and worked in the factories to provide the materials for the war. Lastly, there are two other figures, a man and woman standing side by side, an older couple whom, when I first saw the group of statues, I assumed were the parents of the young man returning. But as I went around the statues and looked at them from the other side, head-on, I could see they weren't his parents. Together they were holding in their hands the tri-folded flag representing the sacrifice they had made--the son who didn't return.
We are all called to do battle in a war that is bigger than World War II. The battle line for this war crosses each of our hearts. We are called to do battle with ourselves, with temptation and sin, with the devil, with the world that is under the influence of the devil. And our weapon in this war is love.
We are called to love, and to lose. That's right, to lose. To lose ourselves in Christ. To die to ourselves. To offer all to Christ and with Christ, in every Mass, to the Father. This is the meaning of the Morning Offering which Fr. Hardon prayed and encouraged others to pray as part of their involvement in the Apostleship of Prayer. In offering ourselves and losing ourselves we find ourselves. We find Christ and eternal life.
This is the meaning of the "martyrdom" that Fr. Hardon predicted. It's only in that Daily Offering, in living in union with Christ's perfect offering at Mass, in living a Eucharistic life by offering ourselves with Christ, in letting the Heart of Jesus reign over us and transform us--only in this, will we be able to survive as Catholics.
Seven days after Fr. Hardon's death on December 30, 2000, Pope John Paul II issued an Apostolic Letter to the Church for the new millennium. It's called "Novo Millennio Ineunte" and in it the Holy Father challenged the Church to go deeper, "Duc in altum!" I want to conclude with words which echo Fr. Hardon's:
"Christians who have received the gift of a vocation to the specially consecrated life are of course called to prayer in a particular way: of its nature, their consecration makes them more open to the experience of contemplation, and it is important that they should cultivate it with special care. But it would be wrong to think that ordinary Christians can be content with a shallow prayer that is unable to fill their whole life. Especially in the face of the many trials to which today's world subjects faith, they would be not only mediocre Christians but 'Christians at risk'".
We must go deeper. We must enter more deeply into the Eucharistic Heart of Jesus as Fr. John Hardon did. Then we will be able to speak the truth courageously with love. Then we will be able to pray in a way that fills our whole life. Following Fr. Hardon there, entering into the Sacred Heart of Jesus, we will offer all and receive all.
Posted by Fr. James Kubicki, S.J. at 3:06 PM