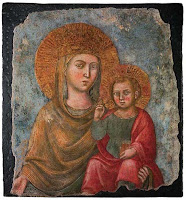 Today there are several feasts in honor of the Blessed Virgin Mary. One is Our Lady of the Way and is celebrated in my community, the Jesuits. When St. Ignatius Loyola arrived in Rome he venerated Mary under this title and asked for and received her special protection. In the Church of the Gesu in Rome there is a lovely side chapel where an old and recently restored image of Madonna Della Strada is venerated.
It is also the feast of Mary Help of Christians. After the resounding and miraculous defeat of the Turkish navy at the Battle of Lepanto in 1571, Pope St. Pius V added an invocation with this title to the Litany of the Blessed Virgin Mary. Then, in 1814, after six years of exile in France under Napolean, Pope Pius VII was allowed to return to Rome and arrived on this day. He attributed his safety during his exile and his return to the intercession of Mary Help of Christians and instituted a feast in her honor for this day.

The National Shrine of Mary Help of Christians is one of my favorite pilgrimage spots. It's only about 40 minutes from where I live and as a child my parents took me there from time to time. I remember two things about those visits: the scary ascent of the bell tower and the crutches that were left outside of the small side chapel/shrine by people who had been cured.

In 2007 Pope Benedict wrote a letter to the Church in China and in it he promised the prayers for the entire Church on this particular day which is also the feast of Our Lady of Seshan. The prayer that Pope Benedict composed for this annual day of prayer for the Church in China can be found at the Apostleship of Prayer's daily calendar page under "Reflect."
Posted by Fr. James Kubicki, S.J. at 11:33 AM

Email ThisBlogThis!Share to TwitterShare to FacebookShare to Pinterest
Labels: Mary