Our Lady of the Blessed Sacrament

Yesterday was the Feast of Our Lady of Fatima, the 93rd anniversary of her first appearance to the three children in Fatima, Portugal. May 13 is also the day, in 1856, on which St. Peter Eymard founded the Congregation of the Blessed Sacrament which has, as its patroness, Our Lady of the Blessed Sacrament. In many places this day is also celebrated in honor of Mary under that title. 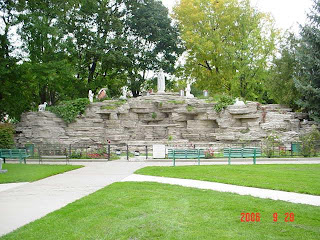 It was most appropriate that I celebrated Mass yesterday for a small group of people at the Milwaukee Archdiocesan Marian Shrine. A young girl named Fautina Philomena Marie Rozewski made her First Holy Communion at that Mass and afterwards we prayed a rosary in front of the beautiful grotto with its statues of Our Lady of Fatima and the three young shepherds.

The title Our Lady of the Blessed Sacrament makes absolute sense. I made a pilgrimage to the Holy Land in the summer of 2006 and at the Basilica of the Annunciation in Nazareth I was a 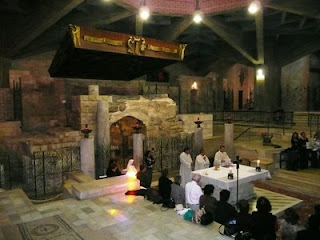 ble to celebrate Mass at an altar a short distance from the spot where tradition has it Mary was when she said "yes" to God's plan that she become the Mother of His Son. I couldn't help thinking: There, more than 2,000 years ago the Word became flesh and here, in a few moments, the Word will become flesh again. Because He became flesh there in Nazareth when Mary conceived Him in her womb, He could give His life on the cross and give His Body and Blood to us in Holy Communion.

In his encyclial "Ecclesia de Eucharistia," Pope John Paul II called Mary "Woman of the Eucharist" and said that she "has a profound relationship to it." She gave flesh to Jesus, thus making it possible for Him to give His flesh for the life of the world. Pope John Paul's words should lead us to "Eucharistic amazement," a favorite expression of his, because they challenge us to make an act of faith in the Presence of Jesus in the Eucharist and in ourselves when we receive Him. Here's how Pope John Paul II described the Eucharistic meaning of the Annunciation, Visitation, and Nativity:

The Eucharist, while commemorating the passion and resurrection, is also in continuity with the incarnation. At the Annunciation Mary conceived the Son of God in the physical reality of his body and blood, thus anticipating within herself what to some degree happens sacramentally in every believer who receives, under the signs of bread and wine, the Lord's body and blood.

As a result, there is a profound analogy between the Fiat which Mary said in reply to the angel, and the Amen which every believer says when receiving the body of the Lord. Mary was asked to believe that the One whom she conceived “through the Holy Spirit” was “the Son of God” (Lk 1:30-35). In continuity with the Virgin's faith, in the Eucharistic mystery we are asked to believe that the same Jesus Christ, Son of God and Son of Mary, becomes present in his full humanity and divinity under the signs of bread and wine.

“Blessed is she who believed” (Lk 1:45). Mary also anticipated, in the mystery of the incarnation, the Church's Eucharistic faith. When, at the Visitation, she bore in her womb the Word made flesh, she became in some way a “tabernacle” – the first “tabernacle” in history – in which the Son of God, still invisible to our human gaze, allowed himself to be adored by Elizabeth, radiating his light as it were through the eyes and the voice of Mary. And is not the enraptured gaze of Mary as she contemplated the face of the newborn Christ and cradled him in her arms that unparalleled model of love which should inspire us every time we receive Eucharistic communion?
Posted by Fr. James Kubicki, S.J. at 1:41 PM