Feast of the Most Holy Trinity 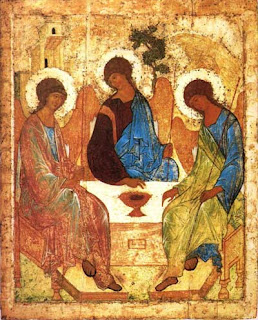 Though I've not actually seen it, I imagine that this annual feast in honor the Most Holy Trinity brings many parish priests to tears. What can you say about this greatest mystery of the Christian faith? How can you talk about the very nature of God, a Mystery of Three and One? What does this mystery have to do with the daily lives of the congregation?
Yet, the Catechism of the Catholic Church #234 states: "The mystery of the Most Holy Trinity is the central mystery of Christian faith and life." Notice, this mystery is not only central to our Christian faith--what we believe--but also to our life--how we are to live.
The mystery of the Trinity brought St. Ignatius Loyola to tears, but not because he felt helpless in the face of preaching. In his autobiography #28, speaking in the third person, he described it this way:

One day while saying the Office of Our Lady on the steps of the same monastery [of the Dominicans near Manresa, Spain], his understanding began to be elevated so that he saw the Most Holy Trinity in the form of three musical keys. This brought on so many tears and so much sobbing that he could not control himself. That morning, while going in a procession that set out from there, he could not hold back his tears until dinnertime; nor after eating could he stop talking about the Most Holy Trinity, using many comparisons in great variety and with much joy and consolation. As a result, the effect has remained with him throughout his life of experiencing great devotion while praying to the Most Holy Trinity.
What St. Ignatius shows us is that ultimately we are to approach God more with the heart than with the head. Our intellect will never be able to understand the mystery of the Trinity. We cannot dissect God like a piece of scientific data. We must, in the words of Catherine de Hueck Doherty, "fold up the wings of the intellect and descend into the heart." We must approach God with humility and love, allowing God to reveal Himself to us.
This is what Jesus told His disciples to do. Matthew Chapter 18 begins with the apostles arguing over which of them was the greatest. Jesus called a child over and said: "Amen, I say to you, unless you turn and become like children, you will not enter the kingdom of heaven. Whoever humbles himself like this child is the greatest in the kingdom of heaven." This echoes words of Jesus that appeared earlier, in Chapter 11, when Jesus prayed: "I give praise to you, Father, Lord of heaven and earth, for although you have hidden these things from the wise and the learned you have revealed them to the childlike."
These two passages are a call to conversion. We must "turn" away from our usual way of thinking in which we tend to say "I won't believe, I won't trust, unless I can understand," and become humbly receptive to what God reveals of Himself through the Scriptures and the Church. We are called to approach God not with suspicion and a "prove-it-to-me" attitude, but with love, the love of a child who is assured of the love of the parent and responds with trust, allowing him or herself to be led and even carried.
The Mystery of the Most Holy Trinity is an invitation to enter into the Love who is God, to be filled with a love that can bring you to tears, and to return that love with an offering of your entire self.
Posted by Fr. James Kubicki, S.J. at 8:58 AM