The symbol for the evangelist John is an eagle.  The theology of his gospel is soaringly high.  He begins his gospel writing about the Word or "Logos" which in the Greek world stood for Wisdom.  The early Fathers of the Church said that John found the wisdom about which he wrote at the breast of Jesus during the Last Supper.  When he drew near to the Heart of Jesus he drank from the source of wisdom and was able to soar into the heights that his gospel takes us.

As the saying goes, "actions speak louder than words."  So "the Word became flesh."  God took flesh so that humanity would not only hear about or hear from God, but would see and touch and experience God in the flesh.

St. Ignatius Loyola, in his Spiritual Exercises, invites people to not only read about Jesus, nor to simply think about the scenes in the gospels, but to use the imagination to experience them.  Jesus is the Living Word whom we encounter in the gospels.

I don't think St. Ignatius' insight is original.  It was this same motivation--to not only read about the birth of Jesus but to experience it as though one were actually present--that led St. Francis of Assisi in 1223 to create what many have called the first Nativity scene.  In Greccio, Italy he brought together an ox and an ass, a manger and hay, so that people would experience for themselves what it must have been like for Jesus to be born.  He wanted them to not only hear the gospel but to see the baby Jesus with the eyes of their hearts.

At Midnight Mass in 2011 Pope Benedict said the following about this:

"Francis discovered Jesus' humanity in an entirely new depth. ... This human existence of God became most visible to him at the moment when God’s Son, born of the Virgin Mary, was wrapped in swaddling clothes and laid in a manger. ... For God’s Son to take the form of a child, a truly human child, made a profound impression on the heart of the Saint of Assisi, transforming faith into love. ... In the child born in the stable at Bethlehem, we can as it were touch and caress God.

"This has nothing to do with sentimentality. It is right here, in this new experience of the reality of Jesus’ humanity that the great mystery of faith is revealed. Francis loved the child Jesus, because for him it was in this childish estate that God’s humility shone forth. God became poor. His Son was born in the poverty of the stable. In the child Jesus, God made himself dependent, in need of human love, he put himself in the position of asking for human love – our love." 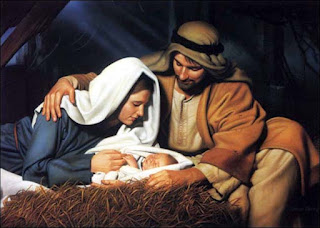 God came to save the world not with a purifying and destroying flood, not with legions of soldiers nor armies of angels, not with thunderbolts.  God did not come with violence to impose His will on humanity nor to force people to be good.  God came as a poor, weak baby to attract our attention and our love.

This is completely contrary to human or worldly wisdom.  Yet, whose birthday is remembered annually throughout the world?  Is it Nebuchadnezzar's?  Is it Alexander the Great's?  Is it the birthday of Caesar, Julius or Tiberius or one of the others?  Is it Napolean's?  Or Adolph Hitler's?  Or Stalin, who once asked, "The Pope? How many divisions does he have?"

It is the birthday of Jesus that the world remembers every year.  It is His example that inspired St. Francis that great lover of the humanity of Jesus, of the Christ Child.  It is their example--Jesus and His close follower Francis--that continues to inspire people today.

Love is the only power capable of changing hearts and changing the world.  In his First Letter, John wrote "God is love."  Jesus is love in word, in action, in the flesh.  Now we, as members of His Body, make Him present today.  Let us draw near with our imaginations to the Baby Jesus and show Him our love by promising to love those for whom He became a baby and suffered and died.  Let us commit ourselves to be peace-makers as we read these words from Pope Benedict's 2011 homily at Midnight Mass:

"God has appeared – as a child. It is in this guise that he pits himself against all violence and
brings a message that is peace. At this hour, when the world is continually threatened by violence in so many places and in so many different ways, when over and over again there are oppressors’ rods and bloodstained cloaks, we cry out to the Lord: O mighty God, you have appeared as a child and you have revealed yourself to us as the One who loves us, the One through whom love will triumph. And you have shown us that we must be peacemakers with you. We love your childish estate, your powerlessness, but we suffer from the continuing presence of violence in the world, and so we also ask you: manifest your power, O God. In this time of ours, in this world of ours, cause the oppressors’ rods, the cloaks rolled in blood and the footgear of battle to be burned, so that your peace may triumph in this world of ours."