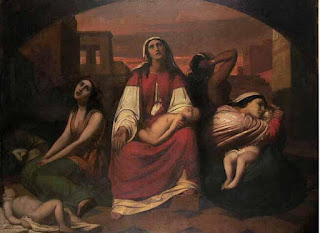 Jesus.  According to the Jewish historian Flavius Josephus, who lived shortly after the time of Jesus, King Herod was a “man of great barbarity.” King Herod was the puppet king of Israel when Jesus was born. Afraid of losing his power when he heard from three mysterious visitors from the East that a new king had been born, he “ordered the massacre of all the boys in Bethlehem and its vicinity two years old and under” (Matthew 2: 16). Jesus escaped when His parents fled with Him to Egypt. Thus the Son of God began His earthly life under the threat of murder and as a refugee.

These innocent boys are honored today as martyrs; the vestments at Mass are red in their memory. The word "martyr" means "witness" and so the question naturally arises, how can the victims of King Herod's fear and jealousy be venerated as martyrs? How can they be considered witnesses to Christ? They had not reached the age of reason. Moreover, they died at the beginning of the earthly life of Jesus; how could they have given witness to and died for the faith?

St. Quodvultus answers those questions in the second reading in the Office of Readings today:

"The children die for Christ, though they do not know it.  The parents mourn for the death of martyrs. The [Christ] child makes of those as yet unable to speak fit witnesses to himself. See the kind of kingdom that is his, coming as he did in order to be this kind of king. See how the deliverer is already working deliverance, the savior already working salvation. ... To what merits of their own do the children owe this kind of victory? They cannot speak, yet they bear witness to Christ. They cannot use their limbs to engage in battle, yet already they bear off the palm of victory."
The children died for Christ.  They died in place of Christ.  Surely the One whose life was saved as their lives were taken blesses their short lives with the gift of eternal life which He won for all through His death and resurrection.  Here's how the British author Frank Sheed put it in his book To Know Christ Jesus:

"There is anguish for us, twenty centuries later, in thinking of the slain babies and their parents. For the babies the agony was soon over; in the next world they would come to know the one they had died to save and for all eternity they would have that glory. For the parents, the pain would have lasted longer; but at death they too must have found that there was a special sense in which God was in their debt, as he had never been indebted to any. They and their children were the only ones who ever agonized in order to save God’s life."

The violent deaths of innocent children have not ended in what many think is a more civilized time.  Families are grieving in Connecticut because a man shot their children.  People speculate on the reasons, but the ultimate reason can be found in our culture. Blessed John Paul II called the culture of the contemporary world a "culture of death."  People are treated as objects and the "virtual reality" of our media and games encourages us to see them as such.  Fear still drives people, as it drove King Herod, to kill children who are seen as threats to our freedom, our life style, our happiness.  Growing and developing outside or inside the womb, children are viewed as property that can be discarded for convenience or in anger.  I am praying for the families of the Innocents of Connecticut today and offering Mass for an end to abortion.
Posted by Fr. James Kubicki, S.J. at 11:25 AM