I've been praying the Divine Office of the Church or Breviary since I was a Jesuit scholastic in formation.  My parents bought me a copy of it as a graduation present when I finished my Masters in English at St. Louis University.  I've never grown tired of it, nor have I found it repetitious.  In fact, there are certain readings to which I look forward every year.  Today's Second Reading in the Office of Readings is one of these.  It comes from St. Fulgentius of Ruspe, a North African bishop who died around the year 530.  His sermon on this feast of St. Stephen speaks of love and forgiveness. 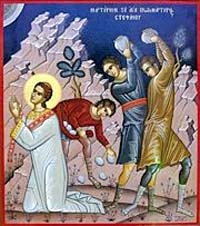 St. Stephen's martyrdom is described in Acts of the Apostles chapter 6.  As he was being stoned to death, people "were piling their cloaks at the feet of a young man named Saul."  The account goes on: "As Stephen was being stoned he could be heard praying, 'Lord Jesus, receive my spirit.' He fell to his knees and cried in a loud voice, 'Lord, do not hold this sin against them.' And with that he died. Saul, for his part concurred in the act of killing."

In his death Stephen clearly imitates his Master, Jesus.  He surrenders his soul into the hands of Jesus and prays for those who are killing him.  One answer to his prayers is Saul to whom Jesus appeared and who, as a result, experienced a complete change.  We can imagine Stephen, from heaven, continuing to pray for Saul throughout his life.  Prayer, united to love that desires the good of one's enemy and to forgiveness that opens a way for God's mercy to enter into the heart of one's persecutor, is the greatest force the world has ever known.

Here are excerpts from St. Fulgentius' sermon that have moved me over the years:

"The love that brought Christ from heaven to earth raised Stephen from earth to heaven. Love was Stephen's weapon by which he gained every battle.... His love of God kept him from yielding to the ferocious mob; his love for his neighbor made him pray for those who were stoning him. Love inspired him to reprove those who erred, to make them amend; love led him to pray for those who stoned him, to save them from punishment.  Strengthened by the power of his love, he overcame the raging cruelty of Saul and won his persecutor on earth as his companion in heaven.  In his holy and tireless love he longed to gain by prayer those whom he could not convert by admonition.

"Now at last, Paul rejoices with Stephen, with Stephen he delights in the glory of Christ, with Stephen he exults, with Stephen he reigns. Stephen went first, slain by the stones thrown by Paul, but Paul followed after, helped by the prayer of Stephen. This, surely, is the true life, my brothers, a life in which Paul feels no shame because of Stephen's death, and Stephen delights in Paul's companionship, for love fills them both with joy."
Posted by Fr. James Kubicki, S.J. at 3:51 PM