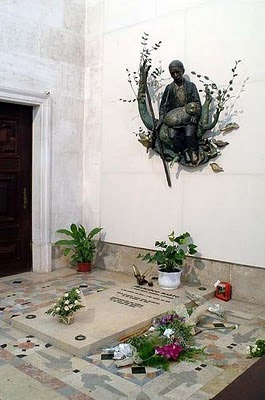 I returned late last night from my pilgrimage to Fatima. It was a very blessed time and I plan on writing about the experience over the next week or so. My favorite place was in the beautiful basilica where the three seers of Fatima are buried. Blessed Jacinta and her cousin Lucia (who died in 2005) are buried on the left side of the sanctuary and Blessed Francisco is buried on the right. Above Francisco's tomb there is a statue of him on the wall. He is sitting in a tree with a lamb on his lap and birds all around him. The birds are even on the outer edges of the slab of rock that frames the statue and on the tomb itself. Why?

There is a story told that one day Francisco ran into another boy who had captured a little bird. Francisco begged him to let it go but the boy refused. Francisco offered to pay him to release the bird and ran all the way home and back to get the "ransom money." When the other boy released the bird Francisco called after it, "Now be careful and don't get caught again!"
Like his namesake, St. Francis of Assisi, this saintly boy loved God's creatures and didn't want to see any of them hurt. And so the birds surround his statue and his tomb.
Posted by Fr. James Kubicki, S.J. at 3:55 PM

Email ThisBlogThis!Share to TwitterShare to FacebookShare to Pinterest
Labels: Fatima