The story of Fatima goes back to 1916 when an angel appeared to three children--Lucia, Francisco, and Jacinta--in preparation for the Blessed Virgin Mary's appearances. Then in 1917, on the 13th of each month from May to October, except for August, our Lady appeared to the three children in a pasture called the Cova da Iria. In August the children were detained in jail by government officials and Mary appeared to them on the 19th of that month at a place closer to their home--Valinhos. Today a large basilica and plaza have been built at the Cova and a replica of the original chapel (the Capelhina) is in the plaza next to the site of Mary's appearances. 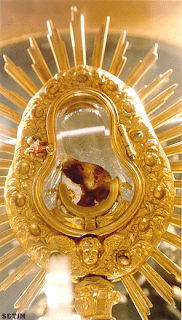 On my recent pilgrimage to Fatima I, and 25 other pilgrims from Wisconsin, the Twin Cities, the Chicago area, and Austin, Texas, flew to Newark and then to Lisbon, Portugal, arriving on December 8. Fatima is about 80 miles north of Lisbon and on the way we stopped in Santarem, site of a Eucharistic miracle that occured in the year 1247. We were able to climb behind the high altar and venerate at closehand the miracle of a Host that turned to flesh and blood.


Our hotel in Fatima was located just outside the grounds of the shrine, a place filled with an atmosphere of peace. I celebrated Mass for the Solemnity of the Immaculate Conception at the main altar in the basilica and afterwards 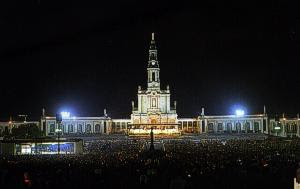 we visited the tombs of the three children, located just outside the sanctuary.

At mid-morning the next day, I celebrated Mass in the Capelhina, at an altar right next to a statue of Our Lady of Fatima which marks the spot where Mary appeared. Afterwards, we toured the large complex of shrine buildings which include a perpetual Eucharistic adoration chapel and reconciliation rooms. In the afternoon a Sister from the Philippines took us through an exhibit entitled "Fatima, Light and Peace" where we watched a video and saw the various offerings that people have left in honor of our Lady, including the crown which contains the bullet from the assassinati 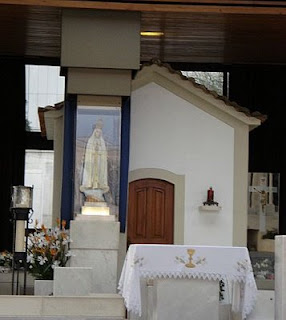 on attempt against Pope John Paul II. At 5 PM I gave the first of three talks for our pilgrimage.


On December 10, after Mass in the Capelhina, we went to Valinhos, the site of the August 19 apparition as well as two of the three appearances of the angel. A short distance away is a village called Aljustrel where we visited the home of Jacinta and Francisco and the home of their cousin Lucia where the angel appeared at the family's well. We also visited the church where the children were baptized and where Francisco visited "the Hidden Jesus" in a wood tabernacle that is still in use. In the late afternoon I gave my second talk which focused on the story of Fatima from 1916 to the present.


Between the Cova and Valinhos there have been erected Stations of the Cross. On the next morning we walked and prayed the Stations which were given by Hungarian Catholics from around the world who had fled their homeland during the post-World War II period of Communist oppression. The Stations end at a beautiful chapel which they also financed. In the afternoon we celebrated the Sacrament of Reconciliation and Mass in a new part of the shrine located under the plaza and in front of another large church built to accomodate close to 15,000 people. I gave my third and final talk afterwards. 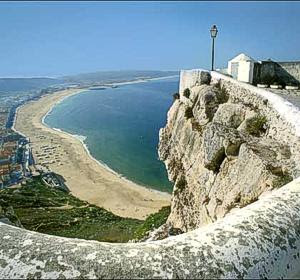 On December 12, the Feast of Our Lady of Guadalupe, I had the privilege of celebrating Mass in the Capelhina as the sun rose. After breakfast we boarded our bus and drove to Batalha, where there is an impressive 14th Century church. We then drove to Nazare, a coastal town where one of the oldest known statues of the Madonna and Child is venerated. Many explorers and missionaries, including St. Francis Xavier, paid homage to our Lady here before embarking on their perilous journeys. Though the beach was deserted, I took off my shoes and socks and put my feet in the Atlantic Ocean which was warmer than I'd expected, warmer than Lake Michigan this time of year.


Finally, on Sunday, December 13, we celebrated Mass in the Holy Family Chapel, one of the many chapels in the shrine, and afterwards we burned all the many prayer petitions that we had carried with us to Fatima. We drove to Lisbon where we visited an old defense tower built on the Tagus River, a monument to the Navigators and Explorers, Jeronimos monastery, the Cathedral, and the birthplace of St. Anthony of Padua. We ate lunch in central Lisbon at a sidewalk cafe on a sunny day on which the temperatures were in the 60's.


On December 14 we chased the sun across the Atlantic and arrived in Newark and then in Chicago, giving thanks for a safe journey filled with blessings.
Posted by Fr. James Kubicki, S.J. at 1:23 PM