I wondered about the title I gave this particular entry. Somehow it didn't seem right. The expression "Divine Child" or "Christ Child" sounded better. Yet, the reality we celebrate today is that God became a tiny, fragile baby. The Divine Word through whom everything was created, became a baby completely dependent upon His earthly parents. He cried, had to be nursed and fed, couldn't roll over on His own, spit out his food, soiled Himself, and in time, talked baby-talk. It sounds almost scandalous to say those things, yet they are part of the truth that God became human and lived our human existence, including the first fragile days, weeks, and months of it. If this is at all scandalous, it's the scandal of the cross. The Second Person of the Blessed Trinity began His earthly life on the wood of the manger and died on the wood of the cross. He, the eternal God, could die because He became human, lived as a weak baby and died as a crucified man. This "scandal" is the mystery of love, of what lengths God will go to prove His love for us.

Unfortunately much of our Christmas art makes it hard for us to appreciate this truth of our faith. I have Christmas cards and holy cards that make the newborn infant appear to be a two year old child with wisdom beyond His years, blessing the shepherds and animals and wise men who come to visit Him. 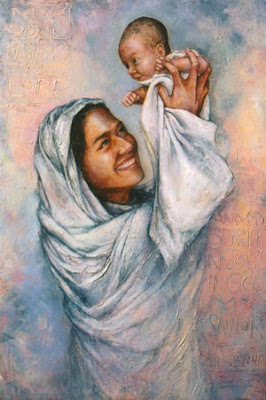 That's why my favorite image of the Baby Jesus is one that a Twin Cities artist, Christopher Santer, painted some years ago. I first saw it when I visited the National Evangelization Teams office in West St. Paul in 2000. In a corridor, on a wall, was a copy of a painting that had Mary raising her newborn infant in the air. And the baby looked like a real baby, with unfocused, startled eyes as though He were asking, "Whoa! Where am I?!" I immediately asked who the artist was and where I could get a copy of this painting. It now hangs in the office of the Apostleship of Prayer--a constant reminder that God loved us so much that He became a baby.

Email ThisBlogThis!Share to TwitterShare to FacebookShare to Pinterest
Labels: Christmas