To Denmark and Back

That title makes it sound as though I took another trip across the Atlantic, but the truth is that I went to Denmark, Wisconsin on Tuesday afternoon and returned yesterday. Denmark is the location of the Monastery of the Holy Name of Jesus, a group of nine Discalced Carmelite Sisters. Mother Mary Elizabeth had asked me to lead the community's Advent Penance Service.


I had the blessed opportunity to meet with Mother for about an hour after I arrived and had one of those "God-incidences" or "small world moments." I told Mother that I had just been to Fatima and her face lit up. Before entering the Carmelites, Mother had been part of a religious group of women associated with the World Apostolate of Fatima. She made several trips to Fatima and so we were able to share our experiences of that special place. She told me: "What Lourdes is for the body, Fatima is for the soul." That certainly rings true for me. I continue to reflect on my recent pilgrimage to Fatima and to savor the graces of that visit. 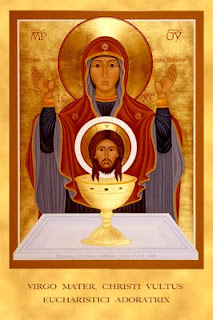 Before celebrating Mass I had another "God-incidence." In the sacristy was a copy of an icon that I have hanging in my room at the Marquette University Jesuit Community. It was given to me by Fr. Mark Kirby a few years ago when I visited with him in Hamden, Connecticut. He had been a Cistercian monk in Rome and is now founding the new Diocesan Benedictine Monastery of Our Lady of the Cenacle in Tulsa, Oklahoma. Obviously, I thought, Mother also knows Fr. Mark and she later told me that he is a good friend of their community.


There is a word for these sorts of connections. A friend of mine, Fr. Raymond Gawronski, S.J., who used to teach at Marquette and now works as a spiritual director and professor at St. John Vianney Seminary in Denver, calls this "a web of grace." In the Body of Christ we are all connected. But it is also true that within this Body, there are some special connections, like the ones we have in the Apostleship of Prayer and through this blog. It is grace that brings us together.
Posted by Fr. James Kubicki, S.J. at 9:34 AM